Liberia is a small country located in West Africa; it is bounded to the North by Guinea, to the West by Sierra Leone, to the East by Ivory Coast, and to the South by the Atlantic Ocean. Today, Liberia receives the highest rainfall and equal sunshine in West Africa, a natural condition suitable for agricultural activities. Usually, the rainy season lasts for six months, but due to over-harvesting, there has been a downward shift. Today, increased deforestation is negatively affecting Liberia in numerous ways, some of which include biodiversity loss, scarcity of water or drought, low crop yields, higher intensity storms, coastal erosion and flooding.

Nevertheless, Liberia has a fertile agricultural environment, where seeds from fruits eaten by pedestrians eventually germinate and grow without any agricultural care. On the other hand, Liberia still isn’t able to produce enough food to feed its people. However, before I was born and when I was a kid, Lofa County, my home county, was referred to as the breadbasket of Liberia because of its high food productivity. At the time, the use of fertilizer and pesticide was limited. This was before 14 years of civil crisis. One thing that is not realized by many people is the increase of different kind of diseases as a result of the use of fertilizers and pesticides nowadays by farmers. The priority of the government in the past has been to support systems for the increased production of export commodities. Those cash crops for which government support is high include rubber, cocoa, coffee, and oil palm. Other reasons Liberia is unable to produce more food includes the use of primitive tools and farming methods, with a lack of sustainable farming knowledge, erosion and deforestation.

The use of primitive tools and lack of knowledge

About 99% of the Liberian farmers use primitive tools such as hook, cutlass, and axe to produce food; the same tools used for more than a century and a half. Cutlasses and axes are used by the men for brushing and cutting down trees, and the hook is used by the women for tilling the soil. Usually, farmers using these tools to make farms, with no sustainable knowledge or training, produce a low quantity of food.

Farmers in Liberia use these tools to brush, fell trees, and till the soil. Most, if not all, are unaware of the negative impacts posed by this method of farming. Rotationally clearing and tilling the land is breaking down forests and leaving behind shrubs and gradual desertification, in which the rain washes away the fertile topsoil after each tilling.

This makes me think that farmers in Liberia need sustainable knowledge through training in agroecological methods; training about the negative impacts of rotational farming, the use of fertilizer and pesticides, deforestation, and the importance of miss-cropping. I personally believe that sustainable farming knowledge, together with primitive tools, will enable local farmers to grow more food in Liberia, and Lofa County can once again become the breadbasket it once was. I also believe that the elimination of the use of fertilizer and pesticide will have a good impact on our health, which currently poses a severe health problem. 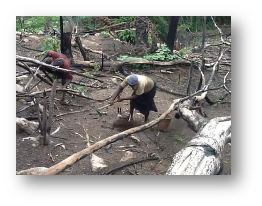 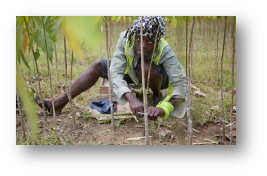 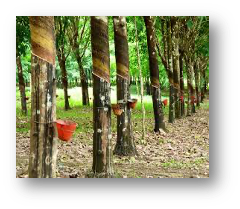 Liberia, wanting to increase its revenue earnings, has focused on the expansion and improvement of cash crops. As a result, local food production has dropped sharply. In addition, Liberia has become one of the world leading producers of rubber, which has had several negatives impacts. Rubber farming has gradually taken over the entire country, with people now turning their farmlands into rubber farms, and away from food products. This creates an increased reliance on the market and cash exchange for food. As a result, when the rubber price drops, hunger flows over the entire country, contributing to school dropout rates and other negative social outcomes. This is especially true for parents who depend on the rubber for food and to send their children to school.

Finally, I deeply believe that if plantains, banana, and cassava were introduced during the colonial era, the number of rubber farms we see around us today would not be in existence and food imports would be greatly reduced.

A lack of government support to transition local farming practices from primitive to modern so that food can be grown by small-hold farmers as opposed cash crop production in Liberia is causing a serious setback to the country agriculturally. To rectify this problem, our government needs to provide modern supports instead of primitive supports- e.g. distribution of cutlasses, hooks, and axes without sustainable farming knowledge through training. The government of Liberia should offer two-week sustainable training courses to farmers as part of its yearly Agricultural Festival across all its counties, which seeks to promote farmers. Doing so would empower farmers and provide them with modern farming strategies and methods that are environmentally friendly.

Helping them to develop this knowledge, and providing the necessary agricultural materials could help them feed their families and earn a steady income, thereby alleviating hunger and poverty across the country (as the majority of Liberia’s population are farmers). Personally, I think this idea can help reduce the import of food, alleviate hunger, and progressively stabilize the country’s economy. Moreover, it will reduce the unemployment rate, and make Liberia self-reliant in times to come.

To achieve this, the government of Liberia should have training and demonstration sites for local farmers, where regular training on different modern farming methods are carried out, other than just providing tools and seeds. Also, a site where students studying agriculture can immediately practice acquired knowledge, gain practical experience and motivation to go and establish their own farm, with continued support from the government.

In conclusion, to implement what is written on the Ministry of Agriculture vehicles, “end hunger in Liberia”, we need to work harder towards this end by empowering our local farmers and ensuring food sovereignty in Liberia. Again, primitive tools and the lack of sustainable farming knowledge can no longer feed the entire population of Liberia and therefore we need to consider strategies towards developing sustainable food economies and resilience for future generations. Finally, we can incorporate traditional agricultural food production practiced by our forefathers, with modern techniques and equipment to enhance food production in Liberia.

An Update on Ebola in West Africa

Our Role in the Future of Healthcare in Liberia

Facing the Present, Preparing for the Future

Becoming a Medical Doctor from a Traditional Background

My experiences with Project Abroad in Tanzania and Kenya